Price drops to $303 if 1 interested trekker joins this trek

In order to provide you with the best possible price and to get as much money as possible directly to the people who are actually doing the work, we do not charge you in advance for teahouse lodging and food. The guide will be able to book accommodation for the group in advance during high season. However, you will pay the teahouse owner directly for food and lodging. Budget at least $25 a day for food and lodging to be paid in cash directly to the teahouse. Estimated food & lodging for this trip $300 per person.

For 'Guide & Permit Only' treks we do not include transportation to/from the trail head. Your guide will help you arrange transportation to the trail head in the case where public bus tickets or a hired private vehicle is required. In addition to your own fare, please pay the fare of your guide and porter (if you have hired one) for public buses and public jeeps. In the case of flights, a fee for the guides transportation is included in the price. You have the option of allowing us to also book your flight this ensures that your guide can be on the same flight. You are also free to book your own flight with the airlines directly if you wish please let us know your flight information if you book your own tickets. If you are on trek in which multiple trekkers have joined we will provide you with the contacts of other members of your trek so that you can arrange your transportation together.
Included Services
Optional Services (Porter)
Guide 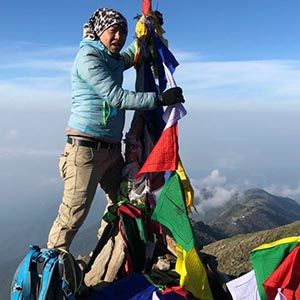 A great option for those with less time, the Langtang valley trek allows trekkers to get high into the Himalayas without having to climb a high pass. Although the region was devastated by the 2015 earthquake when Langtang village was completely destroyed by a massive avalanche, the region is recovering and trekking routes are open in this spectacular valley.

Side trip Upper Langtang Day Hike: This day hike from Kyangjin Gompa leads to the pristine Upper Langtang Valley toward the head of the valley and the Langtang glacier (about 6 hours’ round trip to the glacial view point). There are no teahouses past Kyangjin Gompa so you’ll have to take a packed lunch, but you’ll get to experience the wild beauty of the region.

Side trip via Gosainkunda: The Hindu sacred lake of Gosainkunda sits at an altitude of 4380 m (14,370 ft). This destination draws trekkers and pilgrims alike. The trail passes through villages, forests, and beautiful mountain vistas before arriving at the sacred lake.

Side trip via Laurebina La & Helambu: This route goes over the 4610 m (15,125 ft) Laurebina La pass offering expansive views over the region before descending to Helambu. Continuing through forests and villages the trail descends to the road head at Timbu.

March is the start of the ‘Spring Season’ when temperatures begin to rise from their winter lows. By the end of March, temperatures are significantly warmer at lower elevations and hot air from the valleys tend to create clouds in the mountains during the afternoons. Mornings are generally clear, with the clearest weather coming just after sunrise. At high altitudes, while generally warmer than the previous months snow is still possible, and heavy snow storms in March are not unheard of. Mornings and nights are still cold.