Around Manaslu via Kal Tal, via Punggen Gompa, via Tsum Valley, via Ganesh Himal Base Camp, and via Manaslu Base Camp (23 days)
Manaslu Region, Nepal

Price drops to $592 if 2 interested trekkers join this trek

( Purchase of at least 2 permits required. If someone else joins your trek this fee will be refunded.)

In order to provide you with the best possible price and to get as much money as possible directly to the people who are actually doing the work, we do not charge you in advance for teahouse lodging and food. The guide will be able to book accommodation for the group in advance during high season. However, you will pay the teahouse owner directly for food and lodging. Budget at least $25 a day for food and lodging to be paid in cash directly to the teahouse. Estimated food & lodging for this trip $575 per person.

For 'Guide & Permit Only' treks we do not include transportation to/from the trail head. Your guide will help you arrange transportation to the trail head in the case where public bus tickets or a hired private vehicle is required. In addition to your own fare, please pay the fare of your guide and porter (if you have hired one) for public buses and public jeeps. In the case of flights, a fee for the guides transportation is included in the price. You have the option of allowing us to also book your flight this ensures that your guide can be on the same flight. You are also free to book your own flight with the airlines directly if you wish please let us know your flight information if you book your own tickets. If you are on trek in which multiple trekkers have joined we will provide you with the contacts of other members of your trek so that you can arrange your transportation together.
Included Services
Optional Services (Porter)
Guide 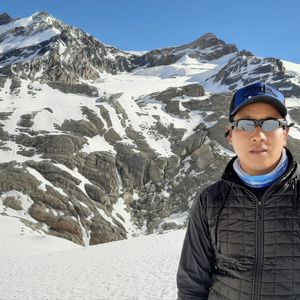 The Around Manaslu trek is often likened to how the Annapurna circuit used to be. The lodges are rustic, crowds are fewer, and the scenery is wild and rugged. Like the nearby Annapurna circuit, this trek covers a diverse array of landscapes starting in the green, lower hills and climbing past lakes and picturesque villages to the rock and ice covered Larke La (5106 m). From Samagaon there are spectacular side trips to Punggen Gompa an isolated monastery at the foot of Manaslu and Manaslu Basecamp.

Side trip via Kal Tal: A 3 to 4-hour hike above Pork, Kal Tal is a worthwhile side trip in good weather for its superb mountain views.

Side trip via Tsum Valley: This remote valley was only opened to trekking in 2008. Bounded by Ganesh Himal and Sringi Himal, and Boudha ranges, the valley was settled by people of Tibetan origin, and has a rich cultural history. The trail is lined with chortens and mani walls and home to the historic monasteries of Rachen Gompa and Mu Gompa. Accommodations may be basic but what the region lacks in amenities it makes up for in hospitality.

Side trip via Punggen Gompa: This tiny monastery at the foot of Manaslu makes up in location for what it lacks in size. The day trip from Samagaon to Punggen Gompa offers spectacular views of the mountain.

Side trip via Manaslu Base Camp: High above Samagaon, this day hike follows a ridge overlooking the clear blue lake of Birendra Tal with panoramic views across the valley. It’s a strenuous climb that offers rewarding views during the ascent to the basecamp of the world's 8th highest peak.

Side trip via Ganesh Himal Base Camp: It's a steep climb to the small nunnery of Gumba Lungdang preached beneath the towering peaks of the Ganesh Himal but well worth the effort for the breathtaking views and serenity of this little visited gompa.

March is the start of the ‘Spring Season’ when temperatures begin to rise from their winter lows. By the end of March, temperatures are significantly warmer at lower elevations and hot air from the valleys tend to create clouds in the mountains during the afternoons. Mornings are generally clear, with the clearest weather coming just after sunrise. At high altitudes, while generally warmer than the previous months snow is still possible, and heavy snow storms in March are not unheard of. Mornings and nights are still cold.

Around Manaslu via Kal Tal, via Punggen Gompa, via Tsum Valley, via Ganesh Himal Base Camp, and via Manaslu Base Camp (Elevation Profile)