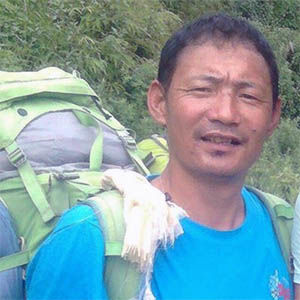 Temba is most at home in his village of Hunkong, in the Sankhuwasabha District of Nepal. This mountainous region is home to Makalu, the fifth highest mountain in the world. A family man with 4 children ranging in ages from 14 to 20 years, when he is not leading treks or scaling 8000 meter peaks, Temba enjoys farming in his village where he grows crops of millet, corn, rice, wheat, and potatoes. With 15 years of experience as a trekking guide and 12 years climbing the highest peaks in the world, Temba is nearly as at home the mountains as he is on his farm. He has lead trekking groups in the Khumbu, Langtang, Annapurna, and Around Manaslu. He has also accomplished the amazing feat of summiting Mount Everest twice within a 3 day period. In addition to Mount Everest, Temba has been on expeditions in Pumori, Ama Dablam and Manaslu.