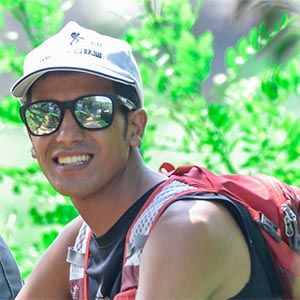 Subas, whose friends call him “Smile”, is originally from the village of Pattale in Solukumbu region of Nepal, but he now lives in Pokhara. Subas has been working in the tourism industry since 2008 first as a porter then as an assistant guide and now as a trekking and city guide. He has completed training courses as a trekking guide, Pokhara city guide, CPR, and is also studying bird watching. During his years as a porter and guide he has trekked all over Nepal including Annapurna, Langtang, Everest, Rara, and Upper Mustang Regions of Nepal. When not guiding Subas enjoys short slow running, dancing, camping, exploring new places, and updating his social media accounts (Facebook, Instagram, Twitter, LinkedIn, Pinterest and WeChat).