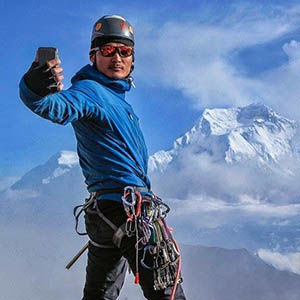 Like many who grew up in the Khumbu (Everest region), Tashi comes from a long line of mountaineers. His grandfather died tragically while working for a Korean expedition 1972, during the deadliest climbing accident in Nepal when an avalanche on Manaslu claimed the lives of 15 climbers. Despite the risks Tashi’s father followed into the family business working on ascents of Everest and many other peaks. Tashi started out on a different path becoming a monk with a degree in community health work he worked as a medic at Kopan monastery in Kathmandu before succumbing to the call of the mountains. Life in the mountains was a natural fit for Tashi. He started guiding treks in 2007, three years later he moved on to mountains. Since then he has summited & guided Mt. Everest several times, Ama Dabalm, and Baruntse, and led trekking peak climbs of Island, Mera, Pachermo, Chulu East, and others. Tashi is a certified (IFMGA) professional International Mountain guide with a completion Of Diploma in Mountain, certification in 2018 & also a Instructor Of NMIA (Nepal Mountaineering Instructor Association). He has also led numerous treks, in the Khumbu (Everest Region), Langtang, Rowalling, Around Annapurna, Around Manaslu, and Dolpa. Even when not working Tashi enjoyes sport climbing. He has also put up two new climbing routes on mountains near Manang and in Dolpo & open many rock & ice climbing routes in Everest region & Annapurna region of Nepal. In off season Tashi provide a Climbing training through NMIA & individually as well, beside that he enjoy exploring new climbing routes of mountains, rock & ice climbing, enjoys canoeing, motorbike touring, playing football (soccer), and basketball.