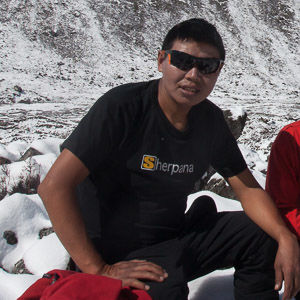 Densa grew up a day’s walk from the Tibetan border in Farang, a village where farming -- not mountain climbing -- was the main occupation. In search of better opportunities, he headed off to Kathmandu where he met up with a cousin who was a climbing guide. His cousin helped him get a job as a porter and encouraged him to learn English, so he could move up the trekking ladder and become a guide. While working as a Climbing Sherpa on Ama Dablam, Densa climbed up a steep section of rock and then asked a more senior climber, “How do I get down?” This experience made Densa realize that if he was going to continue this line of work, he needed training. He is now an Aspirant Mountain Guide (NNMGA), and has completed basic mountaineering, high mountain rescue training, as well as being a licensed trekking guide. Armed with his technical training, Densa has summited Everest three times; once from the north (Tibet) side and twice from the Nepal side. He has also summited K2 in Pakistan, Cho Oyu twice, Ama Dablam 5 times, and many less well-known peaks throughout Nepal. When he is not leading treks or climbs, Densa enjoys swimming and spending time with his wife and two daughters. For the past few summers, Densa has been guiding groups on the glaciers of Norway.