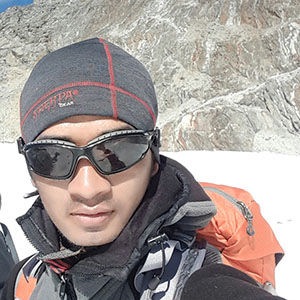 Originally from the Solukhumbu region of Nepal, Dorjee has been leading treks since 2010. He has lead treks all over Nepal in all major trekking regions including: Annapurna Region (Circuit, ABC, Mardi Himal, Upper Mustang, and Poon Hill), Everest Region (Base Camp, Gokyo, and 3 Passes), Rolwaling Valley, Langtang Region (Langtang Valley, Gosiankunda, and Tamang Heritage Trail), Dolpa, and even out to Kanchenjunga in the far east of Nepal. He has also lead ascents of Island, Mera, and Loboche East trekking peaks. When not in the mountains leading treks Dorjee enjoys rock climbing, both playing and watch sports, listen to music, playing guitar and read books. Dorjee is also a 2nd degree black belt in karate, and during the trekking offseason he teaches karate in Kathmandu.