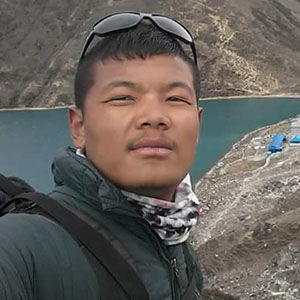 Sonam is originally from the village Kharikola, south of Lukla in the Solukhumbu district of Nepal. He started first as a porter and worked is way up to becoming a guide and climbing Sherpa. He has lead treks in most regions of Nepal including Annapurna, Upper Mustang, Manaslu, Everest, and Langtang. In addition to trekking he has also been on expeditions to Everest (reaching the South Col) and Amadablam (reaching camp 3) and summiting Himlong in western Nepal. He has led climbs of several trekking peaks including Island, Mera, and Lobuche East in the Everest Region, and Tharpu Chuli (Tent Peak) in the Annapurna Region.