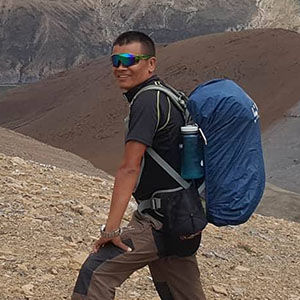 Nima is originally from a village just below Lukla, a town known for being the 'gateway' to the Everest Region. Nima has been helping trekkers visit the mountains of his home since 1998. During that time, he has led treks in almost every region of Nepal, including: Everest, Langtang, Manaslu, Annapurna, and Dolpa. He has also led trekking peak ascents of Mera, Pisang and Chulu West peaks. In addition to his years of experience, Nima has completed training in Climbing, First Aid, and as a mountain guide. When not trekking, Nima enjoys travelling and learning about cultures in other countries.