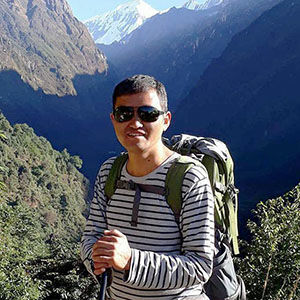 This guide has cancelled 1 trek after confirming.
Cancellation Details

Da Tenji has been guiding treks and leading climbs in the mountains of Nepal since 2003. In that time he has led treks in the Everest, Annapurna, Langtang, Manaslu, Tsum Valley, Kanchenjunga, and Dhaulagiri regions of Nepal. Da Tenji has led successful climbs of Mera, Island, Pisang, Thorang, Nayakgng, Naya Kanga, and Lobuche peaks. When not in the mountains Da Tenji enjoys playing Volleyball.

Cancellations
Occasions when Da Tenji Sherpa has withdrawn as the guide after first confirming he was available.
Kanchenjunga North to South Base Camp Loop Cancellation

Details
Da Tenji Sherpa withdrew as the guide for Kanchenjunga North to South Base Camp Loop 6 days before the trek was scheduled to depart on Oct 19, 2019, and about 2 months after the trek was confirmed.

Reason Given
Due to last minute changes need to take different trek from an agency.