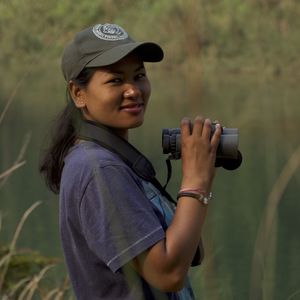 Samikshya is originally from Bardia Thakurdwara near Bardia National Park in Western Nepal. She has been currently studying BASW ( Bachelor in Social Work) in Padma Kanya Multiple Campus Kathmandu. And she would like to be known as an independent women. Being from a place so rich with wildlife it is no surprise that Samikshaya developed a strong appreciation and extensive knowledge of the birds and wildlife of Nepal. She started guiding near her home in Bardia BNP ( Bardia National Park), where she completed courses in both basic and then senior nature guiding. She has also completed the female trekking guide training course from NMA (Nepal Mountain Academy) Kathmandu. Samikshya has guided treks in Langtang, Rara Lake (Western Nepal) Helumbu , Annpurna (Poon Hill), Chitwan Hills, and Telpani Hills (West Nepal). Samikshaya says she became a trekking and nature guide in her words, “[Because] I love the nature, wildlife, birds, culture, and religion and I would like to be a great example of professional women guide in Nepal to encourage more female guides to come in this trekking field". In her free time, Samikshaya enjoys nature photography, visiting new places, exchange the cultural experiences and bird watching. She had finished her German language A1 and A2 courses from Goethe institute Kathmandu.

We chose Samikshya to lead our trek because she was a nature guide as well as a trekking guide, and she was brilliant in both respects. She was efficient in making all the arrangements, found us a porter even though we only requested one at quite short notice, and knew the local conditions enough to advise us on the best schedule – we were grateful for the early start on one day when a thick fog descended soon after we’d finished walking for the day. One trekker in our group was rather slow; Samikshya was extremely patient, gave her a helping hand up some of the steeper steps and was almost literally propping her up towards the end of a rather tough day. She was happy to stop any time we saw something interesting, lent us her binoculars and spent time at the lodge after each day’s trek looking through books on the birds and flowers of Nepal to identify what we’d seen during the day. She even arranged a special surprise for one trekker’s birthday – far over and above the expectations of a guide. If we ever come back for another trek we’ll certainly request her again, and in the meantime, would definitely recommend her to anyone else.