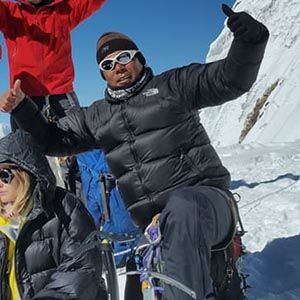 Nigma is from the Solukumbu region of Nepal. He has completed training in introductory rock climbing, and basic mountaineering, as well as trekking guide training. He has led treks and climbs in most regions of Nepal including, Dolpo, Upper Mustang, Annapurna, Everest, Manaslu, and Langtang. Nigma has successfully led climbs of several peaks including, Lobuche, Island, and Pokalde Peaks (Everest Region), Nayakhang and Yala Peaks (Langtang Region) and Tent Peak (Annapurna Region). Nigma was also on an Ama Dablam climbing expedition that was unsuccess due to bad weather, and hopes to do more mountain climbing in the future.