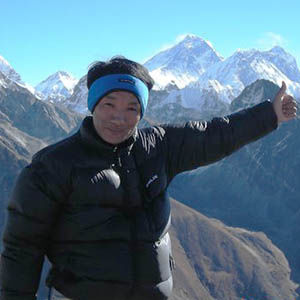 This guide has cancelled 1 trek after confirming.
Cancellation Details

Karma grew up in Bung Khiraule, in the Solu Khumbu region of Nepal. After finishing school in the village, he moved to Kathmandu to attend college and pursue a degree in education. While in college he worked as a trekking guide during his holidays and time off in order to pay for his studies. After completing his degree, Karma worked part-time for 6 months at a local college but ultimately returned to work in the tourism sector as both a trekking guide and hotel employee. He has led treks in almost every region of Nepal including the Khumbu (Everest Region), Langtang, Annapurna, Upper Mustang, Nar Phu, and around Dhaulagiri, as well as climbs of Mera and Island peaks. In his off time, Karma enjoys both Nepali and “English” music. A musician himself, Karma plays the drums, harmonium, and flute. In Nepal, one of his favorite places to relax is by the lakeside in Pokhara.

Cancellations
Occasions when Karma Lhakpa Sherpa has withdrawn as the guide after first confirming he was available.
Around Manaslu via Tsum Valley Cancellation

Details
Karma Lhakpa Sherpa withdrew as the guide for Around Manaslu via Tsum Valley 9 days before the trek was scheduled to depart on Apr 15, 2019, and 1 day after the trek was confirmed.

Reason Given
No reason was given for this cancellation.