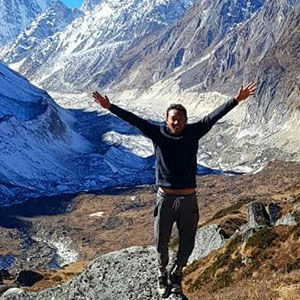 Nawang Chimi Sherpa grew up in the Village of Chaurikharka just below Lukla in the Khumbu region of Nepal. Growing up, his parents ran a trekking lodge in Phakding, which is the first stop for trekkers and climbers on their way to Everest Base Camp. Nawang developed a taste for adventure sports when he was 17, working as a staff member on a trail race that ran from Rolwaling over three passes into the Khumbu. He was impressed by physical feat of the race, and has been a lover of adventure sports ever since. When not in the mountains, Nawang is often found sharpening his skills on the climbing wall in Kathmandu, canyoning with friends or on mountain bike trips around the Kathmandu Valley. And indoors Nawang trains as a boxer in his local gym and is currently studying to get his bachelor’s degree in business. Nawang is a licensed trekking guide and is trained in ice climbing. He has led treks in Annapurna, Manaslu, and Everest Regions including ascents of Island Peak.

Around Manaslu via Kal Tal, via Tsum Valley, via Punggen Gompa, via Ganesh Himal Base Camp, and via Manaslu Base Camp
led by Nawang Chimi Sherpa

Our guide Chimi Sherpa can be described by many great words. He is young but very matured and professional. He is also very good humour and fun to be guided by. He knew the trek very well and communicate in English superbly. Thanks to Chimi, me and my wife had special trekking experience and gained a great depth of culture around Manaslu and Tsum Valley. Simply said if we ever decide to come back to Nepal we would like Chimi to guide us again.

Chimi is a very friendly and easy going guide. He was very easy talkative and enjoyed having a laugh with us. He is younger than some other guides around but has a lot of experience for his age. We really enjoyed our time with him.

Our party consisted of 5 New Zealanders of both sexes aged between 53 and 61. Organising the trek through Sherpana was very easy and stress free. We chose Nawang Chimi Sherpa as our guide and found him to be extremely professional, knowledgeable, considerate and friendly. We arranged to meet him at our Kathmandu hotel the day before the trek and he arrived promptly and was able to answer all our questions. Chimi did everything he could to make the days enjoyable by everyone, ensured we were safe at all times, and always checked we hadn't left any of our gear behind. He picked the best accommodation available and always looked after us in the teahouses. Chimi also chose great porters who were very friendly and at times went above and beyond our expectations. As we found by observing other trekking groups, one of the most important aspects for a successful trek is to have a great relationship and good communication with your guide. Chimi was excellent in this regard and we recommend him without hesitation. Thank you Chimi and our wonderful porters for looking after us so well.

Around Manaslu via Tsum Valley
led by Nawang Chimi Sherpa

Chimi (Nawang) really contributed to ease and enjoyment of the trek. The 20 days my son and I spent with him went so well. We had nots of fun chatting with him learning about Nepali life and his experiences. He was very connected to the local people. This made the trek more interesting as he kept us informed about what the people we met were saying. Nawang helped in many ways including getting good prices and services, finding best route (especially so we could avoid vehicles where roads and trails occurred) and keeping us on schedule.

Cancellations
Occasions when Nawang Chimi Sherpa has withdrawn as the guide after first confirming he was available.
Around Manaslu via Tsum Valley Cancellation

Details
Nawang Chimi Sherpa withdrew as the guide for Around Manaslu via Tsum Valley 14 days before the trek was scheduled to depart on Apr 15, 2019, and 6 months after the trek was confirmed.

Reason Given
I have exams and it's conducted by the government and they don't have the exact date for the exam,so they publish exam routine unexpectedly and it's always during the season.