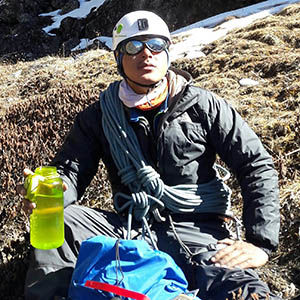 Lhakpa grew up in the small village of Pangkhongma, in the Solo Khumbu region of Nepal. At age 17, Lhakpa began guiding trekkers and climbers on and around the mountains he had known all his life. Now, with more than 7 years of experience, he has led treks through the Khumbu, to Makalu basecamp, over the Amphu Lapcha pass, Around Manaslu, Langtang, and in the Annapurna region. A seasoned climber, he has summited Mount Everest three times and has stood on the 8,156 m (26,759 ft) summit of Manaslu twice. He has completed NMA’s (Nepal Mountaineering Association) Advanced Mountaineering Course and is a trekking guide instructor for the Nepal Academy of Tourism and Hotel Management. When he is not scaling 8000 meter peaks or leading trekking groups through the Khumbu, Lhakpa enjoys rock climbing and playing a bit of football (soccer).

Lhakpa was a phenomenal guide - we could not have asked for someone better and we would highly recommend him. Lhakpa was professional, knowledgeable, sensible and decisive on the mountain - which he refused to call a mountain as they were under 7000m but it was a mountain for us to trek up to 5106m! His mountain experiences and first hand information about what it is like to climb Everest and other 8000m plus peaks added another dimension for us humble trekkers. The best part was that he is a great guy to hang out with for 14 days which is an important part of making the overall trek more enjoyable. Thank you for looking after us so well Lhakpa!