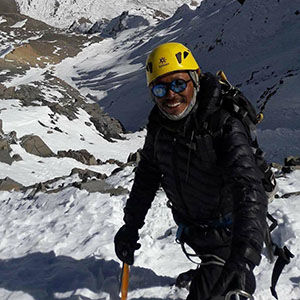 Pasang is originally from the small village of Hunggung near the Tibetan border in the Makalu region of Nepal. He started as a porter at the age of 17 before becoming a serious climber. In 2006 Pasang climbed Mount Everest with his father, the first of his five successful summits of the highest mountain in the world. Pasang is a prolific climber who has successfully climbed eight of the fourteen 8000 m peaks, including Lhotse, Cho Oyu, Makalu, and Manaslu in Nepal, and K2, Gasherbrum I and II in Pakistan. He has also been on expeditions to Annapurna, Dhaulagiri, Kanchenjunga, and many 7000 m peaks. He likes to show his trekking clients the Buddhist monasteries in the villages along the trekking routes and help them appreciate the culture of the region as well as its scenic beauty. In addition to completing trekking guide training, climbing training, and first aid training, Pasang has completed the international level aspirant guide course in Nepal. When he is not an 8000 m expedition or leading a trek, Pasang enjoys playing football (soccer), rock climbing, and cycling.