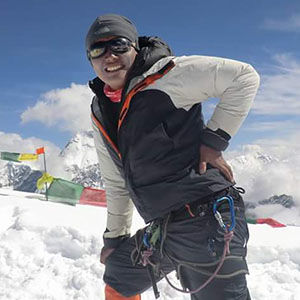 Pemba is originally from Lukla the gateway to the Everest Region of Nepal. He has led many treks throughout Nepal, including treks in his home region: 3 passes (Cho La Kongma La and Renjo La), and into the Khumbu from Rolwaling over the Tashi Lapcha Pass. In addition from the treks, he has led climbs of many trekking peaks in the Everest region including Lobuche, Mera, and Island Peaks. In addition to the Khumbu (Everest) Region Pemba has also lead treks in Annapurna Region. In his free time Pemba enjoys Thakna painting (a traditional Buddhist religious painting). He also enjoys studying Buddhist texts, traveling, seeing new places and meeting new people.

Pemba is a knowledgeable guide and knows the region well. He took care of our packed itinerary with the interest and comfort of everyone in mind. He is caring and I like it that he went into great lengths to provide us with experiences beyond his duties. It was a wonderful trip overall. Thank you very much Pemba. I will definitely look for you again as a guide for my next trek in Nepal.

Pemba is a compassionate and warm hearted individual who has your best interest in mind. He knows the people and area quite well which allows for unique opportunities to arise. I would not hesitate to contact Pemba for another trek.

Pemba made us all feel welcome and helped us when and if we needed it. He is knowledgeable and a great guide.

I did EBC via Ama Dablam trek alone and it was very important for me to have the right guide by my side. I didn't regret that I've chosen Pemba to lead my trek. Pemba is a very good person, friendly, kind, patient, well-adjusted, experienced and professional. I always felt comfortable with him. He is very knowledgeable about Buddhism because he is a monk associated with Monastery at Lukla. Pemba is a great Thangka Painter as well. This trek isn't easy, sometimes challenging but great and unforgettable. It was a highlight of my life! Thanks Pemba. I hope to see you again. Sherpana is well organised trustful company. I got a lot of help when I needed. Especially when I stuck at domestic airport because of bad weather. Lhakpa, thank you much!