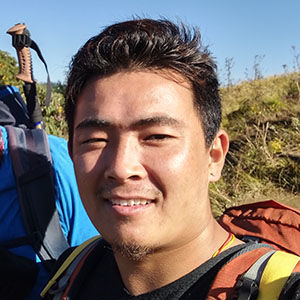 Nima grew up in the Solukhumbu (Everest) region of Nepal. He has been working in the trekking industry since 2007 and guiding since 2012. Nima has led treks in the Annapurna, Everest, and Langtang regions. He has also worked on Everest expeditions up to camp 1, and led trekking peak climbs of Mera Peak in the Khumbu (Everest) region. When not in the mountains Nima enjoys learning new languages and playing sports.

Nima did a great job herding 6 trekkers of varying abilities. He somehow stayed attentive to all of us, no matter how spread out we got! He was cheerful and professional. On this crowded trek, he was able to accommodate us almost everywhere we wanted to stop, sometimes without much warning! It took a few days to figure out our walking speeds and abilities, and then he changed the itinerary to suit our pace of travel! His English was good enough to make jokes and kid around with us, which was fun. He was attentive to our physical well -being, and made sure we were well looked after.

Everest Base Camp via Cho La, via Kongma La, and via Renjo La
led by Nima T Sherpa

Nima was always attentive to our needs, and usually walked with the slowest client, at the end of the line of 4 of us! He made every effort to meet our food and accommodation desires, and often called ahead for reservations so that rooms were waiting when we arrived. He offered to carry our day packs if we were tired, and seemed to be lagging. Nima's English was good enough to understand our joking, and to make jokes himself, which was fun. Nima was a delightful person to spend time with and we would hire him again!

Nima was flexible to our needs, helpful when we had problems, knowledgeable, and overall an excellent guide. Highly recommended!

Throughout our entire trek, Nima has constantly gone out of his way to make our trekking experience unforgettable. On top of demonstrating a rock solid professionalism which helped a lot when we had to progress in bad weather conditions while acclimatizing at the same time (Nima has extensive mountaineering experience in the Himalayas), Nima always put our safety and comfort first and gave us priceless advice and always made sure we were happy with the lodging, the food or the trek as a whole. In addition, Nima is extremely friendly, kind and knowledgeable and our trek was therefore pleasantly fun, relaxed and we learned a lot from him about the mountains and the local customs. While trekking the Annapurna Circuit with Nima, we were unlucky with the weather which could have jeopardized crossing the Thorong pass but drawing on his mountaineering experience, Nima succesfully led us to the top without ever compromising our safety or the good atmosphere of the trek. We simply could not have hoped for a better guide and we cannot imagine our next trek in Nepal without Nima !