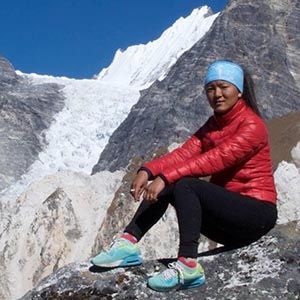 Chhopema is originally from the Lantang region of Nepal. She received her trekking guide training from Nepal Mountain Academy. Chhopema has guided expensively in the mountains around her home, including treks to the Langtang Valley, along the Tamang Heritage Trail, to Gosainkunda Lake, and over the Laurebina La to Helambu. In addition to these treks she has climbed Yala Peak in Langtang Valley and also led treks in the Annapurna, and Everest regions of Nepal. When asked why she became a trekking guide, Chhopema said because “I love travelling and want to meet with different people from different places” and that she wanted to “give empowerment to women.” When not in the mountains Chhopema enjoys visiting with her friends and playing sports like basketball and table tennis, and looks forward to learning yoga.