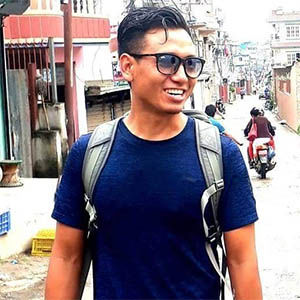 Ngawang, who also goes by Chhering, is originally from the upper Tsum Valley, a remote valley with a rich cultural history settled by people of Tibetan origin. The valley is accessible only by foot via a trail that branches off the Around Manaslu trail. Chhering lives in Kathmandu now, but enjoys opportunities as a trekking guide that take him back to his home valley. In addition to leading treks in the Tsum Valley and around Manaslu, Chhering has also led treks in the Langtang, and Annapurna Regions. In addition to trekking guide training Chhering has also completed a course in avalanche rescue. In his free time Chhering enjoys reading and hanging out with his friends.

Chhering was such a great guide, we feel very fortunate to have had two weeks trekking with him in Tsum and Manaslu. Being originally from the Tsum Valley he is of course a wonderful source of local knowledge of this beautiful area; but I would also recommend him for any trek! He was very communicative and happy to discuss plans before and during the trek, and was very open to adapting the itinerary as required. He was very professional and helpful and answered all of our questions! He will tell you his English is far from perfect but we had no problems at all communicating and understanding each other. Can't recommend Chhering highly enough! Thanks for an amazing trek!

Cancellations
Occasions when Ngawang Tenzin (Chhering) Lama has withdrawn as the guide after first confirming he was available.
Around Manaslu via Tsum Valley and via Manaslu Base Camp Cancellation

Details
Ngawang Tenzin (Chhering) Lama withdrew as the guide for Around Manaslu via Tsum Valley and via Manaslu Base Camp 11 days before the trek was scheduled to depart on Oct 13, 2019, and 4 days after the trek was confirmed.

Reason Given
Not given.