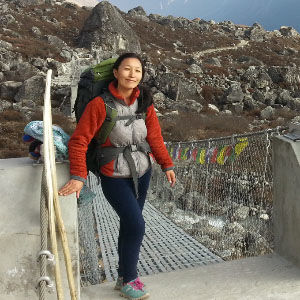 Diku is originally from Kerung village in the Solukhumbu region of Nepal. She has completed trekking guide training and has led treks and guided in Nepal since 2012. She has led treks in the Khumbu (Everest), Langtang, and Annapurna Regions. When not in the mountains she likes to relax and read the paper. Diku enjoys learning new things and meeting new people.

Diku is a great guide, she adapts to your plans, pace and schedule, and is extremely helpful and resourceful. She finds good deals for you, which is very convenient! Diku is always cheerful and makes the way very pleasant with her knowledge of the area and comments about Nepal's culture, people and nature. I would definitely go again with her to another hike and I'd encourage everyone to go with Nepali female guides :) Among them, Diku is definitely highly recommendable!

We really like the trekking, for us it was one of the most beautiful trekkings which we did in our life. Diku is a very friendly patient woman who always wanted to help us first, before she was thinking about here self. Even though she didn't know the area, she helped us a lot and it was interesting that she could speak with all the people we met on the way. She seems to have a very attractive style of speaking to both locals as others guides and trekkers because they were always coming back and asking about her, the next day. We never had any problems with her and missed her when we finished our trekking alone at Annapuri circuit. She had also interesting things to tell us about here own background and here childhood in the area of mount Everest which helped a lot to understand the culture more. Even though the culture of the local people we met is slithly different from here own background. She was also very flexible and I think this made here very suitable to us. Cause we knew most of the time what we wanted to do and how far we would walk and were we wanted to eat/sleep, and she just followed us in that sense, which we really like. We met a lot of guides on our trekking who were much more influencing the chooses the quests make, and I don't think that is something I think a guide should do. But off course this is very different people to people and I think if people like to have a guide who makes more decisions for them, she was also capable of doing so.