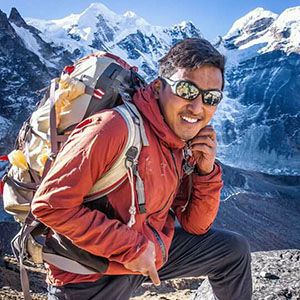 Ang Rita is originally from the Solukhumbu region of Nepal near Lukla. In the years since he started guiding in 2003, Ang Rita has led treks in the Khumbu (Everest), Manaslu, and Annapurna regions. He has led trekking peak ascents of Mera, Pachermo, Pokalde, and Island peaks. He has also worked on Mt. Everest expeditions, reaching camp 2 several times and ascending as high as the South Col. In his free time during the off season, Ang Rita takes training courses to improve his climbing and guiding skills and visits new places. He has completed courses in mountain leadership, basic mountaineering, ice climbing, rock climbing, guide training, and a helicopter marshal course.

Around Manaslu via Manaslu Base Camp
led by Ang Rita Sherpa

Ang Rita is a great choice for any trek in the mountains. He is among the most good-natured, conscientious, enthusiastic & warm people I have ever met. You may think that an overstatement, but it’s not! He is also extremely knowledgeable and capable as a guide. His facility with English may concern you at first, but don’t let it - we had no trouble communicating whatsoever. He is continually working on bettering his language capability and his knowledge in general. What a gem! Pick him - you won’t be disappointed!!

Ang Rita is an awesome guide. He is very passionate about the mountains and is always keen to share his knowledge and stories. He is very kind and caring and was always very attentive to our well being. He contacted us before the trek to ensure we had everything we needed and constantly checked how we were during the trek, ensuring we had enough breaks, water, food, blankets, etc. He discussed the itinerary with us before and during the trek and made sure we saw everything we wanted to see. He is always smiling and his laugh brings that boost you need on those days when you feel exhausted. He really made our trip special and we felt he went above and beyond our expectations. Whilst his English is not completely fluent we never had any communication problems and were able to share many conservations, laughs and jokes together. We highly recommended Ang Rita and miss him and the mountains already.

Around Manaslu via Manaslu Base Camp
led by Ang Rita Sherpa

Ang Rita Sherpa was an excellent guide and made a great companion. I had never been at altitude before and had no reason to worry with him there checking up on me and planning together what to do to best acclimatize. I never felt rushed while hiking and I was never left far behind with Ang Rita pushing the pace but instead we kept a very comfortable pace. I never had to ask for us to stop for a break as Ang Rita Sherpa would periodically check in with me on how I was feeling and either ask or just say that we would be taking a break far before I reached a point of exhaustion. Ang Rita was very informative about the Manaslu region as well as the Khumbu valley region and many other treks. He made sure that I was keeping properly hydrated as well as properly fed and that I was sleeping well in the teahouses. Even though I had not hired a porter for this trek Ang Rita immediately offered to take some of my things to lighten my back pack. Although a set itinerary was made for the trek, Ang Rita never made me feel like it was something that we had to follow and that the true itinerary would depend on how I was feeling day to day. He is always smiles and quick to laugh. I can truly say that I felt as though I have made a new friend and that my trek was made all that much more enjoyable thanks to Ang Rita. If I am ever able to make my way back to Nepal for another trek I wouldn't hesitate to have Ang Rita along with me again and would highly recommend him to any friends or family.