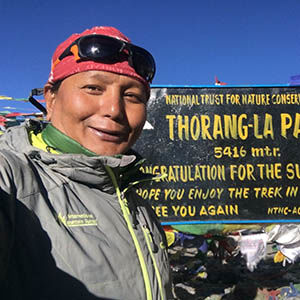 Sonam is originally from Chaurikharka in Solu Khumbu, but grew up in Kathmandu where he attended school from the age of 5. Being a trekking guide is Sonam’s second career -- he was first a martial arts teacher of Shitoryu Karate. At the age of 25 he gave up teaching and started helping his uncles in the trekking business. Now with 15 years’ experience and as a licensed trekking guide, Sonam has led treks in the Khumbu (Everest Region), Around Manaslu, Langtang, Annapurna, Upper Mustang, and Nar Phu. He has also led groups up both Island Peak and Mera Peak. In the summer when the trekking gigs are few and far between, Sonam likes to get his exercise in the pool. An avid swimmer, he tries to swim at least once a week in the summer months. In addition to swimming, Sonam is a cyclist and has lead mountain bike tours as well as treks. In 2005 he had the chance to visit Japan and was awestruck by the Tokyo skyline. He was back indulging his travel bug in 2016 when he visited friends in South Korea. Seoul and Korean food were the highlights of the visit. Sonam’s travel bug has also taken him to India several times and to Mount Kailash in Tibet.

Sanam was incredibly helpful and awesome to work with. Not only did he help us augment our trip dates at the last minute, but he even helped us with a taxi when we returned to Kathmandu. He was always concerned about our well being on the trail. He made sure we were comfortable at each stop and provided ample breaks in between challenging sections of the trek. Honestly could not have hoped for a better guide. I would recommend him to anybody interested in trekking in Nepal.

Sonam is a wonderful guide with a wealth of experience. He took time to explain the culture, religion and history of the region. Sonam seemed to know many people in the Langtang area. When we had health issues he offered suggestions, but honored out decision about how much hiking we could do each day. Our time in Nepal was much richer due to his guidance.

Extremely professional and well organised but with plenty of leeway to adapt our itinerary to our needs and fitness.